Time has flown since New Years Eve and I can’t believe I’m only a week or so away before the ‘difficult’ part of the journey starts. I’m in Costa Rica now, chilling in a hammock after just feeling a fairly sizable earthquake. Large cheers went up from around the town so I’m guessing this is a pretty common thing round here.

Great spot to camp…was an effort lugging up the bike and kit.

Eating Lunch with the pigs

The locals use the lake for everything.

Haven’t a clue what this animal is but I like it.

After crossing over from Belize I was told by my archaeologist friends from NYE that I had to take the 60 km detour to Tikal before heading south again. They had spent months at a time in the jungle excavating this site, suffering snake bites and some pretty unpleasant conditions. These were my favourite Mayan ruins and cycling through the jungle to get there was well worth the effort. These ancient pyramids rise above the jungle canopy, set to the soundtrack of howler monkeys, making the place seem like a set from Jurassic Park. I camped out on a cliff edge overlooking the town at the crossroads, as I set my sights south the following day. 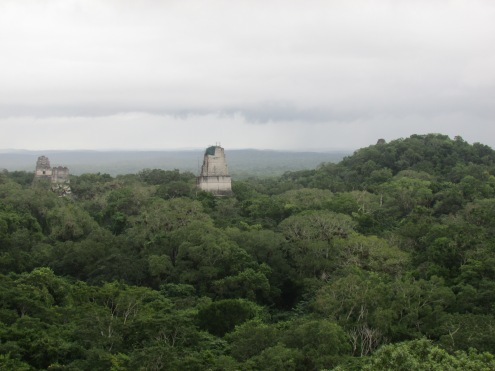 Return of the mountains.

After the weeks of flat riding through Yucatan, it was a bit of a shock to the system to hit the rolling hills of tropical Guatemala again. My first stop was enforced as I was told that to spend the night in the 30 mile zone further ahead, would risk stopping in towns which contained many ranches where not much ‘legitimate’ farming takes place. At the crossroads to Honduras, I swung right instead towards Guatemala City as the clicking noise from a missing bearing in my pedal was slowly turning me a little ‘loco’. As I headed along the dangerously thin roads towards the capital, I passed stunning tiny villages with thatched houses and almost always, young children who couldn’t resist the urge to shout ‘gringo’ at me as I rode past. I was hoping the darkening tan would fool them but sadly they could spot a gringo from a mile away.

The crew at the bike shop in Guatemala City

The journey to the capital was going out of my way but at least it was adding extra miles onto the total. I knew the last 100 km’s towards the capital were going to be almost entirely a punishing climb into the city. The night before, I camped out at a public swimming pool, oddly protected by a shotgun wielding security guard (I couldn’t work out why there was the need for one) and attempted to get a good night’s sleep. One thing I’ve had to get used to in rural Central America is the near militaristic timing of the ‘chicken alarm clocks’ which are seemingly never too far away from any civilisation. These chickens are ruthlessly efficient and as soon as the first hint of light appears (sometimes I feel they’ve confused light with a slightly bright star) the chickens are at it, squawking away until you’re forced to roll out of the tent. They are set to a constant ‘snooze’ function that can’t be turned off and I often found my 5.30 am wake up time became 4.30 am, or whenever the commander in chief of the local chicken population felt the need to make himself heard.

The climb up was a tough one in the scorching sun, but eventually my front wheel crept over the crest of the last hill and I was dropping into Guatemala City, to spend the night at an incredible eco hostel, ran by Guatemalan architect Alfredo, who offers it free to cyclists. His bike shop crew attached to the side of the building were also a great help. He has a documentary coming out soon which explains in detail, his non profit G22’s mission and goals in and around Central America. One big mountain pass later and I was in the picturesque colonial town of Antigua. This town is breathtakingly beautiful, however I was quite possibly the only person in the town who didn’t appreciate its authentic cobbled streets. The punishment my ‘crown jewels’ took, bumping over each cobble, probably left me with an involuntary vasectomy. From there it was a race down the mountains towards the coast line in El Salvador and it’s bizarrely beautiful black sanded beaches.

After a fairly uneventful border crossing, I was forced to stop in the slightly dodgy border town as my card wasn’t working and I’d been left to use my emergency dollars I keep on my bike. The next day in the melting heat, I worked hard over the rolling cliff tops of El Salvador’s ‘ Big Sur’, before stopping at a motel for the night after being given a very good price from a repatriated American, Manuel. I had to feel a little sorry for this guy as he’d been forced home after completing a sentence in the States. Due to his gang tattoos, he had trouble every time he left the safety of the Motel’s high walls. One more day later and after surviving a big dog biting my feet at the border, I quickly crossed into Honduras, under an ever increasingly scorching sun. I was stopping at a local guy, ‘Douglas’s’ house and I’d been given very specific directions to a kiosk at the ‘other end’ of the bus station. Not knowing which end was the opposite of the other, I did a loop, past hundreds of kiosks, before a sharp whistle called me over to Douglas’s busy house, full of his friends and family. After I cooked for whoever wanted to eat, we then attempted to inject medicine into his enormous ‘Turner and Hooch’ style dog, before Douglas told me we were going for a drive at around 11pm, around the town in his car, which looked like something 50 Cent would be cruising around in. With Honduran beats blaring from the huge stereo, we pulled up to a petrol station where his friends began to doughnut their cars around each gas pump. Not the safest place to be ragging a car around but even the shotgun wielding security guard was enjoying the show. 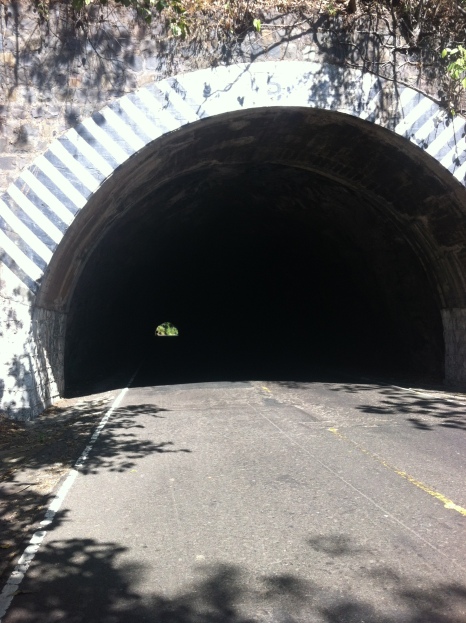 The tunnels had no light in them…a little scary when wild dogs start chasing you inside.

I stopped in this little place 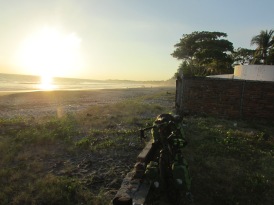 Getting ready to camp on the beach

The next day I headed to yet another border crossing, this time into Nicaragua, where I was about to endure the most pointless 3 hours of lines and forms. The question ‘Where are you coming from and going to?’ always makes me smile when crossing over. A completely rhetorical question at the only land border crossing around but it’s always asked. Eventually I was back on the road again, heading south towards Leon. The following day started off a little annoyingly with a flat tyre, but just as I was cursing having to fix another one, an awesome Kiwi cyclist rolled up along the road side. Andrew had been cycling from South Africa , all the way through to Russia, Alaska and now onto Argentina. Half of the man is made up of his giant quads and it’s safe to say he puts in big mileage on the bike. Very happy to have someone to cycle with, we headed down to Grenada for the day. Andrew’s a sheep shearer which to anyone who isn’t from New Zealand, is one of the hardest jobs to do, wrestling sheep WWE style until you’re left with a fleece on the ground. He had an odd ambition to catch and eat an Iguana, the way the locals do, so the following day’s ride to the Costa Rican border was littered with intervals of Andrew spotting an Iguana, dropping the bike and retrieving his newly acquired slingshot, as he attempted to catch some dinner. For animal lovers out there, it’s safe to say these creatures are faster than a cyclist, so thankfully no harm ever came to any iguana. 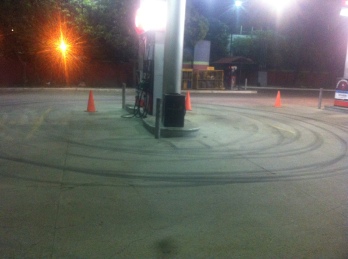 Not the safest place to burn some rubber but properly entertaining.

Straight out of Compton

These guys were good fun. 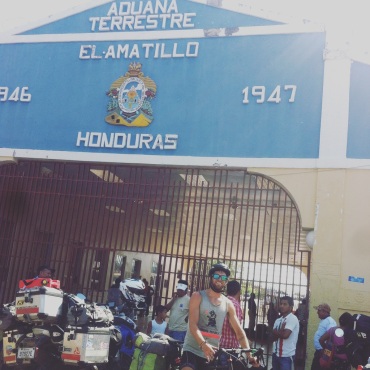 One more border crossing, this time as night fell and we were both over on the Costa Rican side of the border, looking for somewhere to camp out for the night. 4 countries and 5 borders later and I’m getting pretty close to mainland South America. It’s been an incredible experience passing over each border  by land, seeing the food, culture, landscape and architecture change in a split second after crossing an imaginary line. It’s also been extremely tough going. Cycling 160 km’s in 36 degree heat is not an easy thing to do. ‘Coco Frios’ (cold coconuts) became the most heavenly words to read, as I’d pull over for a refreshing coconut water and a brief respite from the constant heat.

Such an amazing sight, these are all giant spider webs. 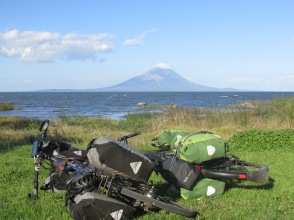 Nicaragua is a gem

Two more countries to go and I’ll be starting the climb over the world’s second largest mountain range, en route to the final destination, deep down in Southern Argentina. The fundraising is still steadily rising, with the figure almost at 60% (£12,000, $16,500). With the tougher days still to come, it will be a real blessing to see that figure continue to rise. Each dollar, pound and euro goes towards brightening up 2016 for some children who have been through far tougher challenges then I’ve ever known. Check out the work Wishes4Kids do and if you feel inspired to do so, please sponsor a mile today.

Miles for a Memory

Miles for a Memory